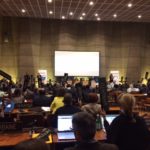 From: Margit Schatzman, Past President

The following is a report to the TAICEP membership on the UNESCO Higher Education Section Meeting on the Future Global Convention on Recognition of Higher Education Qualifications that took place on 5-7 December 2018 at UNESCO Headquarters in Paris.  TAICEP Past President Margit Schatzman attended on behalf of President LesLee Eicher.

TAICEP members from around the world were represented with observer status at the UNESCO meeting to draft a Global Convention on Recognition of Higher Education Qualifications.  Taking its place with 195 UNESCO member states, associate members and other observers, TAICEP’s presence at the meeting confirmed its members’ international status as experts in credential evaluation.

The Global Convention is an effort to enhance worldwide cooperation for global mobility.  It aims to provide real life, practical outcomes for students, academics, educational institutions, and employers.  The Global Convention is based on principles of transparency; fair, reasonable and non-discriminatory recognition processes; and information sharing.

How did we get here?

The growth of students moving across the globe produced the need for an international framework for recognition of higher education credentials.

Preparation for the Global Convention began in 2011-15 with expert meetings, feasibility and preliminary reports.  The Drafting Committee of the Global Convention was made up of 23 experts from all regions who were appointed by the Director-General in coordination with member states.  Serving in their private capacity (not as representatives of member states), the committee met four times and completed a first draft of the report in June 2017.   In the first half of 2018, more than 1,200 comments were received from 70 member states and 10 stakeholder organizations.  These were incorporated into the draft convention that was reviewed at the December 2018 intergovernmental meeting.

How was the meeting organized?

The meeting took place in a large hall at UNESCO Headquarters in Paris and was attended by representatives of member states, associates and observer organizations.  The attendees met in plenary style and approved an editorial board and leadership to run the meeting.  Similar to the United Nations meetings that we have seen over the years, delegates were seated at desk like rows, with each state or organization identified with a placard that could be held up or placed vertically in a slot on the desk to indicate a desire to speak.  Comments and suggestions were referred to as “interventions.”  .  Delegates recognized to speak were always referred to by country or organization, never by personal name.

Simultaneous translation was available to all delegates during the entire meeting in the six languages of the United Nations: Arabic, Chinese, English, French, Russian and Spanish.  Translators sat in two stories of rooms off to the side of the hall and were visible through large glass windows

At one point, a UNESCO legal counsel was called upon to provide legal background and recommendations, especially related to implementation of the convention.

Leaders took turns acting as President of the meeting.  UNESCO staff and other leaders assisted the acting President in identifying speakers and moving the meeting along smoothly.  The goal of the meeting was to reach concensus decisions.  Although it was clearly tempting at times to vote on two opposing options, the leadership made every effort to avoid voting and work toward a commonly acceptable solution.

Over the course of three days, most of the draft document was reviewed.  Suggestions for changes were made in real time and projected on a large screen at the front of the room, over the head table.  The text was available in both English and French.  After each day of meetings, the editorial committee worked on that day’s changes.  Their energy and diligence was incredible.

How can the meeting be characterized?

Opinions about the meeting varied among delegates.  There was some frustration that the entire text was being examined, instead of focusing on the changes in text between the first and second drafts.  The level of expertise on the international qualifications and the details of work in this field varied between the delegates.  Some delegates were nonetheless impressed by the participation by a wide range of member states, including those that are not normally active in higher education qualification communities.  Within a thirty minute period comments came from Cuba, Tunisia, India, Ecuador, Ethiopia, Cameroon, Togo, Palestine, Germany, Sierra Leone, Ghana, Sudan, Italy, the Council of Europe, Uzbekistan, the Holy See, Jamaica, the United Nations Higher Commission on Refugees, Qatar and Greece.  The lively and civil debate was refreshing and inspiring.

How might topics of discussion and debate impact TAICEP members?

The entire draft document relates to the work of TAICEP members.  Some areas of particular interest included:

A second intergovernmental meeting has been tentatively scheduled for March 2019.  The resulting draft Global Convention text is expected to be examined by the UNESCO General Conference with the goal of adoption in November 2019.  It will then be open for adoption by the member states.

What was the impact of TAICEP’s attendance at the UNESCO meeting?

It was clearly important that TAICEP was present and active at this meeting.  TAICEP was visible and recognized as an association representing professionals who have authority, expertise and knowledge of international educational qualifications.  There are still many questions as to the outcome and actual wording of this document.  Our continued presence on this worldwide stage is vital as we contribute to this important area of global influence.